Sport (/spôrt/): noun – an activity involving physical exertion and skill in which an individual or team competes against another or others for entertainment. I am providing you all with the proper definition just in case you forgot what this term is. If you are reading this blog post than you are obviously among the many who are yearning for some form of live sports entertainment. We are all desperate to once again be able to watch our favorite sports, teams, and athletes back in action. And no, watching your favorite team from 1998 does not count. Rest assure, we have real life dates put in place for the continuation of some of our favorite sports!

The NBA and Adam Silver were basically the first major sports league to: A. come to an agreement on salaries while working/playing and B. implement a concrete plan with specific dates for NBA resumption. Laid out is the current NBA timeline for the continuation of their season, at least for now…

So there ya have it. Adam Silver and company catch a lot flack from time-to-time; however, I believe that they worked very hard to provide the masses with essentially the same product that we are accustomed to viewing all the while taking every safety precaution along the way.

Believe it or not, the NBA is not scheduled to be the first major sport’s league to begin. The NBA is scheduled to resume on July 30th. However, the MLB is scheduled to resume on the 23rd of July. Obviously both will be without fans, but nevertheless I could not be more excited. The only aspect of my life that I am looking more forward to is marrying my beautiful fiance. Oh, and by the way, that was hindered by COVID-19 also. The MLBPA (Major League Baseball Player’s Association) finally agreed to terms on a deal consisting of a 60 games schedule while earning 80% of their annual salaries.

If you’re like me, I was super bummed that we were not able to have the 2020 March Madness tournament. For whatever it’s worth, I did a simulated bracket with game-by-game results. And no, each match-up was not a flip of a coin each time, but the results were still very surprising. Anyways, the simulated Final Four consisted of Duke, Michigan St, Ohio St, and Arizona St. The national title game was a BIG10 match-up between the Spartans facing off against the Buckeyes with Michigan St. coming out as the 2020 March Madness victors. How do you think the infamous blank 2020 bracket would have shaped out? 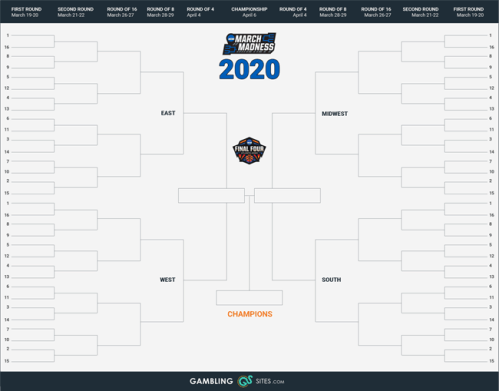