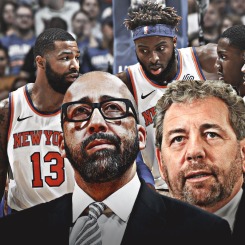 The Lakers (1st in Western Conference) and Celtics (3rd in Eastern Conference) are finally two of the upper-echelon teams in their conferences. Is this positive for the NBA as a whole? Probably so. Will they soon be over-valued handicap plays as we get into the heart of the NBA season? Also, probably so. Begin to sniff out statistical trends that may be in favor of opposing teams gaining significant “edges” as they face off against these two particular squads.

If you have not yet heard, the New York Knicks fired head coach, David Fizdale, after only 22 games (4-18). Whether this firing is right or unjust is beside the point. Once a team loses their coach mid-season, they come to a fork in the road with two destinations. Destination A takes the team to a moral boosting phenomena that heightens motivational factors. This can allow for a team to rally together and play hard for their coach in his “honor,” if you will. However, destination B entails a group that completely collapses and folds and eventually creating a neglected, anguish, or lack of care around the environment of the organization. After a few games, once we have observed which direction in the road that the Knicks have taken, then we can start to develop an “edge” for the remainder of their schedule. Since the firing on the December 6th, the Knicks are 2-1 ATS (1-2 SU). We may not have a big enough sample size yet, but at first glace, the Knicks are rallying around their coach and playing loose with nothing to lose at this point. With this Knicks team, and any other bottom-feeder team, home-court advantage is not as significant when these type of teams come into town. Fans and players alike do not get as hyped-up to face off against these under-performing organizations. Do not be afraid to gamble on these poor squads when going on the road versus a team like the Celtics. The Knicks will probably bring their “A” game, whereas the Celtics more than likely will not, making the Celtics and over-bet in this spot.

Bowl season is just upon us! Your final 4 schools are LSU (1), Ohio St. (2), Clemson (3), and Oklahoma (4). As we currently stand, LSU is a 14 point favorite over the Sooners (O/U: 75.5). Clemson is currently a 2 point favorite over the Buckeyes (O/U: 63). These lines are typically very sharp. However, I will give a quick scenario that I envision… Okay, so Oklahoma is clearly the less superior team with an average defense at best. I envision the Sonners to try and run the ball as much as possible to keep the clock running and their defense off the field against the high-powered Tiger offense led by Joe Borrow. When you run the football with persistence, more time gets taken off the clock. If more time gets taken off the clock then there is less time to score. Do you see where I am going with this? Take a look at making a play on the first half UNDER of the LSU vs. Oklahoma playoff game.

Other NCAAF Bowl games that I love…